October 4, 2019 ArtQuench Featured Artists, News, Out and About Leave a comment

Not so long ago a little girl in kindergarten wanted to be in a school play. Little did she know that her drive as such a young child to perform would set her life in motion to make all of her dreams to come true.

When Gloria showed her outgoing spirit it was obvious to everyone that she had a special spark of magical energy and it would be later in life that the right place at the right time would give her the best opportunities in the career she would choose, acting.

Gloria Garayua in a college production of The Tempest

When Gloria got to high school she was serious about her academic learning. Gloria said ” I found myself struggling on how I wanted to be an artist”. 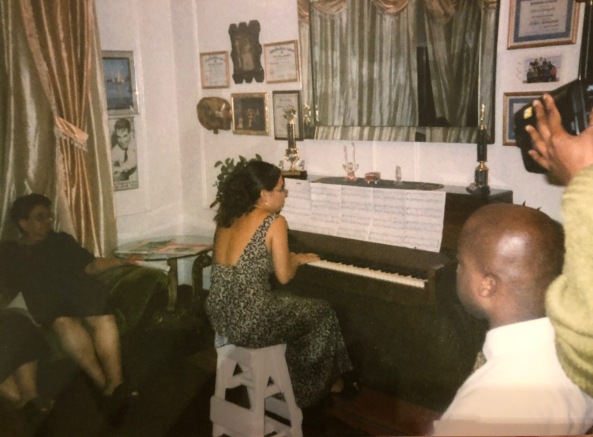 She grew up in Bronx, New York with the understanding that being disciplined and working hard was important. Her father was a good provider, but extras were not part of the plan. Gloria says… “My parents way of living was, food, shelter and love but no extras”. So when Gloria wanted to take piano lessons it was difficult to convince her parents that this was a good idea. It took some time but finally her father told her if you can show me that it is cost affective then you can do it. So Gloria found a place that she could get piano lessons for $25.00 and she was excited! Gloria eventually started teaching piano to students in her senior year of college for the exact same price because as Gloria says…”It’s good karma”.

In her 20’s Gloria was hustling on a daily, travelling from the Bronx to the big city on a 45 minute train ride carrying around a little suitcase with everything she would need to do her day job, go on auditions, her gym clothes, sheet music and a tuxedo to cater at night. Her work ethic was phenomenal. Gloria says…”you have to earn it to make your dreams come true”.

Gloria would eventually get an audition in CA. for the Equity Theater for a famous playwrite Nilo Cruz  “2 Sisters and a Piano”. The role called for a Latina who could play the piano. She thought it was the perfect job and now needed a car. Gloria had saved up 2,000.00 from a lot of hard work and bought her first car for 1,600.00. Gloria laughs as she tells me how the exhaust would come up out of the dashboard and she would drive around with her head out the window”. Talk about determination to get to the goal line! “I packed three suitcases and left The Bronx as if I were never coming back”.

“I new no one in LA and needed to find work and a place to stay, so I began house sitting for an actor who lived in Sherman Oaks, which gave me 3 months to get started in L.A. I began making payment installments on an LA showcase in hopes of getting an agent. I would go everyday from 9 a.m. to 10 p.m. for 6 days straight. Two of the panels were agents and I was chosen 1 out of 20. So it was all worth it.

Gloria Garayua and Courtney Cox on the set of cougartown

“My first audition came in my first week on the job”. It was for a multi million dollar movie with Jim Carrey. The audition came. I was feeling terrible about my audition and left crying. I thought they won’t be calling. I needed to go home so I booked a flight and the first day home I was in Target and my agent called and said the director wants to meet with you. I said why? I went to meet the director and I thought about how I had really made a connection to the kid that I would be doing the nanny role with before the audition and that I believe this had helped to make it authentic.”

“One month later I was selling car warranties over the phone and another call from my agent came and I almost fainted…I booked the job! “Fun with Dick and Jane”. The money was great and this job would be the stepping stone to my acting career. This would let me know that I had made the right choice to continue on this path”.

Gloria would continue to book jobs frequently for many years, NYPD Blue, 6 FT. Under, and many more. Her career was really taking off.

Gloria Garayua on How to get away with murder.

Gloria Garayua Rosie Perez and I from Bounty Hunter

Gloria Garayua Shemar Moore and I from SWAT 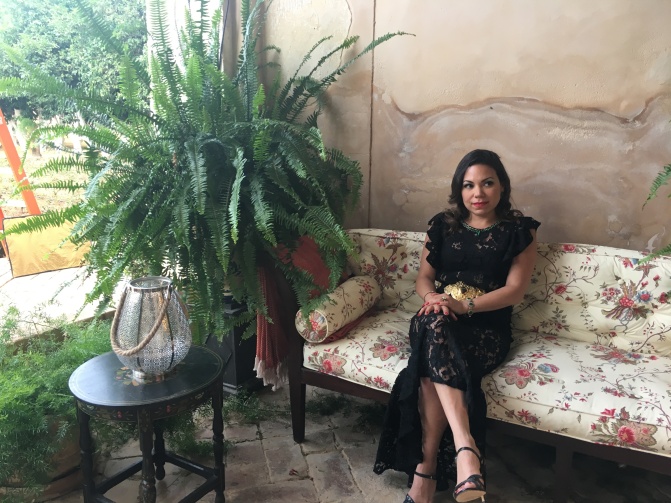 Gloria would soon receive another phone call but this time from home and she did not quite know how to react , she was devastated. She would find out that her father had stage 4 rectal cancer. It seems her father had been in pain for a while but the kind of man he was, was never to complain. His job was to take care of his family. Within a year he was gone and Gloria was now trying to deal with the emotions of the loss of her father.

“God was helping me heal through my work. This was my art therapy “.

“When I was 17 I always had thought I would be a doctor and it would be soon that I would play the role of an intern on “Grey’s Anatomy” “.  After 3 seasons it was time to move on to more roles and challenges. She would do Shonda Rhimes show “How to Get Away with Murder”, 9 episodes to be exact. Gloria has a long resume working along side of the best in the business on shows like “Shameless”, “The Good Doctor”, “S.W.A.T.”, “Bounty Hunters”, “Reckoning” and more. Gloria says she takes good care of herself by eating healthy and getting to bed early when she is working, which is most of the time. “Taking care of my body makes me strong and allows me to be at my best”.

Gloria Garayua On set of Reckoning with Sam Trammell

Gloria has been focusing on teaching her students and working on her craft every day and she is ready for her next role.

I found Gloria to be someone who has a good understanding of who she is and what it takes to get the job done. She is smart and passionate and takes her work very serious. We see Gloria going all the way… Emmy’s…Oscar’s…and maybe soon her own television show!  -Stacia Gates

Find More From Gloria at;