April 14, 2015 ArtQuench News, Out and About Leave a comment

Solo Show at the Orange County Center for Contemporary Art

Artist Echo Lew has a fascinating story being the son of a Taiwanese farmer. A self taught inventor, Echo has made a successful career in the contemporary art world and is still going strong with a solo show opening at the Orange County Center for Contemporary Art.

Echo Lew is a very unique artist who manipulates light, to create ‘light drawings’ with his own ingenious style. Echo talks about his work, “I have been drawing with traditional mediums for twenty-eight years. I used oil painting to explore the effects of light in a 2006 solo exhibition, “See the Light,” at the Little Tokyo Cultural Center, partnered with Helen Keller International. I became curious about the effects of lights in motion. Could this become the basis of a new kind of drawing? I experimented with cameras and lights until I was able to spontaneously tap into decades of drawing experience while the camera’s shutter was open, bringing life to a series of “Light Drawings.” 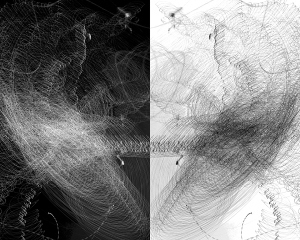 Artist Echo Lew uses motion, light and the camera to draw in space for his
upcoming Solo Show.

Mr. Lew’s signature style includes ‘light drawing’ where he uses a digital camera with long exposure to catch his ‘drawing in space’ or ‘dancing with lights.’
Art critic Peter Frank writes about Mr. Lew’s work, “In each of his Light Drawings, to paraphrase Paul Klee’s famous phrase, Lew goes for a walk with a line. Or, more to the point, he goes for many walks, and runs, with any of several lines. The density of linear activity Lew captures, left as such or enhanced, can describe not just arcs and traces, but thick textures and surging luminescences, ineffable atmospheres and ominous spaces. Lew’s images often suggest the tangled notations of a multi-pronged Rapidograph pen. But nowhere do they rely on the physical earmarks of drawing – variations in pen pressure, the vagaries of ink, or even the grace of the artist’s hand. Rather, they concentrate our attention on the appearance of line itself – line as image, that is, not as notation, as webs of paths rather than as traces of gesture, reflections on rather than records of movement.”
Echo Lew is a self taught artist living and working in Los Angeles. His artworks are featured in galleries and private collections throughout the United States, Japan, Italy, Taiwan and China.

Enter Our Monthly Art Contest and you could win the cover of our next Issue of AQM!