Antonio Anelli to the family!

Antonio’s landscapes bring the emotion of warmth and light

to the viewers heart.

Antonio Anelli was born in Molfetta on July 14, 1941. His passion for art began at 5 years old, he copied the images of the saints, then, at age 12 he begins to portray the faces of actresses and actors of very famous films, which are printed on postcards.

(Above photo Antonio with his father)

Having completed his military service, he decided to attend the Art Institute of Bari and so it was that he began to explore the various nuances of the art. Between the ’70s and ’80s he began to experiment with his early work through artistic nudes and still lifes, using pencil and paper, later he would use oil paints on canvas to play still lifes, nudes and landscapes of his beloved Puglia.

Puglia, with its rich landscape of colors and vibrations, which are released during the spring, has always been the source of inspiration for all of his paintings.
His palette captures the colors reflected from the sea, sunrises and sunsets with their succession of lights, shadows, flares at night where the colors are trapped in the fullness of time, the marriage of light with the landscape.

Monet was his inspiration since the time of high school, in fact the great Master said: “The landscape is the best place to capture the flux of light. ” 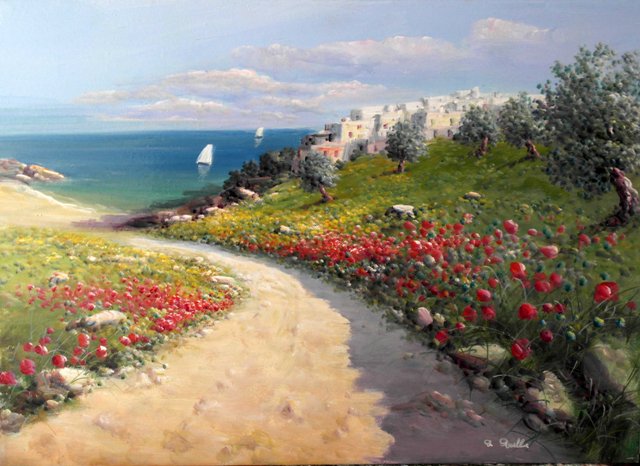 Antonio Anelli is a landscape painter , he plays with colors soft but full light of the typical landscape of his homeland , painting white houses and rocky terrain. His painting lives of the emotion of the past and present , of that emotion in him that is timeless. Antonio Anelli captures and transfers us with a sure hand all this, in its genuineness of expression , in contrast with today’s civilization , withered barbarized .

He is the witness of sunshine still alive and nature which must be loved and cared, so that it may continue to excite us.
From the 80s until today Antonio Anelli has had many collaborations with several galleries throughout Italy, which have helped to promote and raise awareness of his paintings in various exhibitions, art galleries private and public and in demonstrations in various Italian cities .

Among the many group and solo exhibitions made​​:
In 2000 was published the work “Marina” on the cover of the Chamber of Commerce, Industry, Handicraft and Agriculture of Bari
In 2003 the newspaper “Il Tempo” was published an article about a group exhibition organized by “The World of Art” in Rome, she was a special section dedicated to the Master Rings.
In 2005, she staged a solo exhibition at the City of Lancaster and
in 2007 at the Galleria Art Space of Sassari.
Also in 2012, he remembers the exhibition at Palazzo Margutta and in 2013 an exhibition of selected works in the exhibition

“Emotions and Poetry” at the Palazzo Roberti in Mola di Bari.

Don’t miss out on this month’s art competition! This one could win you the cover of AQM!