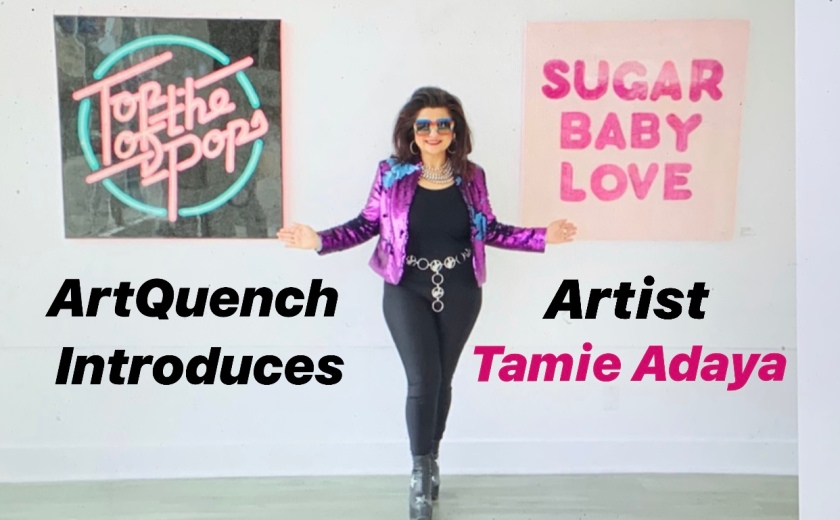 January 15, 2020 ArtQuench Featured Artists, News, Out and About Leave a comment

Artist Tamie Adaya lights up the room with not only glitter but with her exuberant personality, so full of life and speaking with such clarity about what she hopes the world will see through her art.

Tamie wants to bring something into the world that she feels has faded away. Tamie brings new energy to a somewhat stagnant world of lost inspiration. 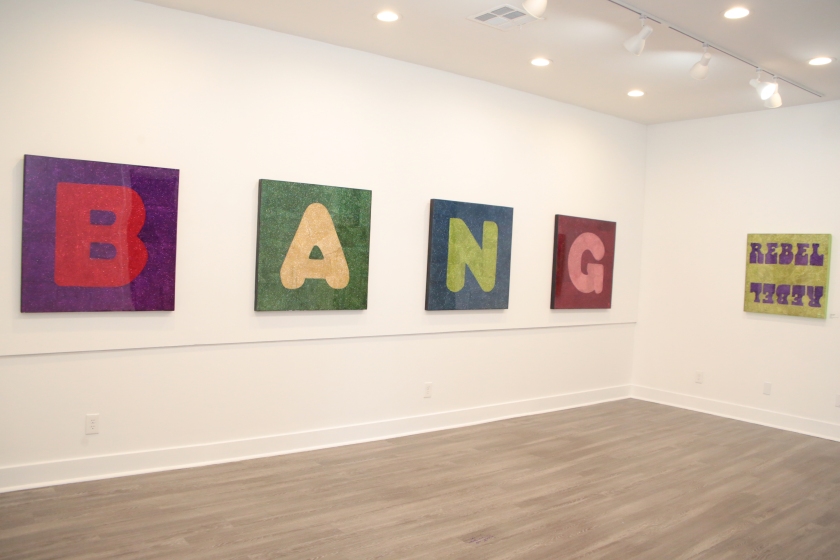 Tamie is a brilliant artist whose artwork celebrates her passion for art and fashion and inspires the world to once again take part in the listening to vinyl and dressing up with personal expression of ones self. 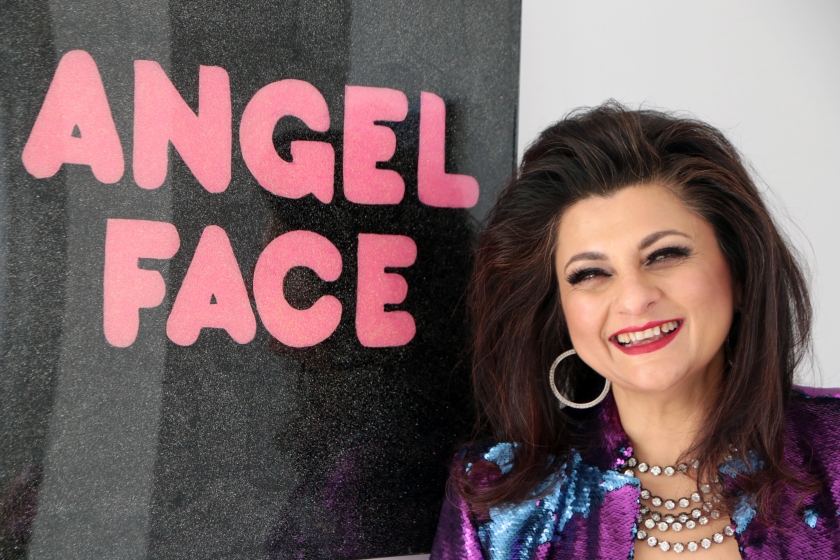 As I walked into Val Kilmer’s HelMel Studios to view a new exhibition, what I found was an electric vibe with a lot of bling. I began to view each piece of artwork with an immediate understanding that this was much more than bold beautiful art. This was a statement! The artwork represents a time of pop art expressionism from the 1960’s and the Neo pop of the 1980’s. Tamie gives the viewer a look back at the world of a flamboyant period where music and fashion found a way of expression through glitter and glam and thinking far outside of the box. Music was beginning in the 1970’s to give visual presentation, the Glam Rock era, with big and bold fashion images and clever set design.

As I spoke with Tamie I found her to be of love and light. She told me she grew up the youngest of 6 children and was influenced by the music her older siblings listened to like the Rolling Stones, The Kinks and Led Zeppelin. “Since the age of four I was always dancing and listening to rock and roll. When I was seven years old I used to watch a favorite show of mine called “Top of the Pops” a television program on the BBC showcasing performances of the top selling recording artists. This was very exciting for me and this became my church. 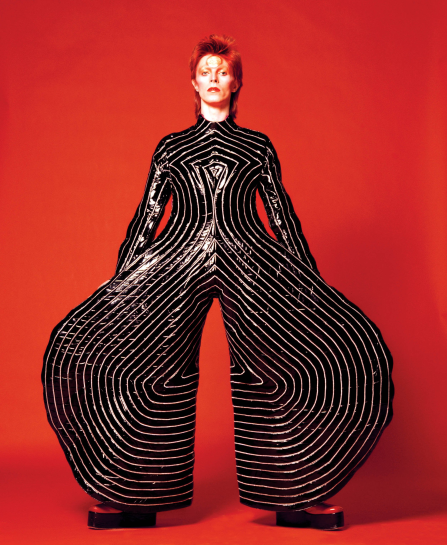 Image of David Bowie from article of Newsweek.com

I can remember seeing David Bowie for the first time all dressed up in his beautiful shiny jumpsuit and I loved it! Seeing him opened up a whole new world for me.” As I listened to Tamie speak of these memories I could feel her energy heighten and her voice began to carry a serious tone. I understood that her soul is part of a world in which flamboyance and rock and roll exist. 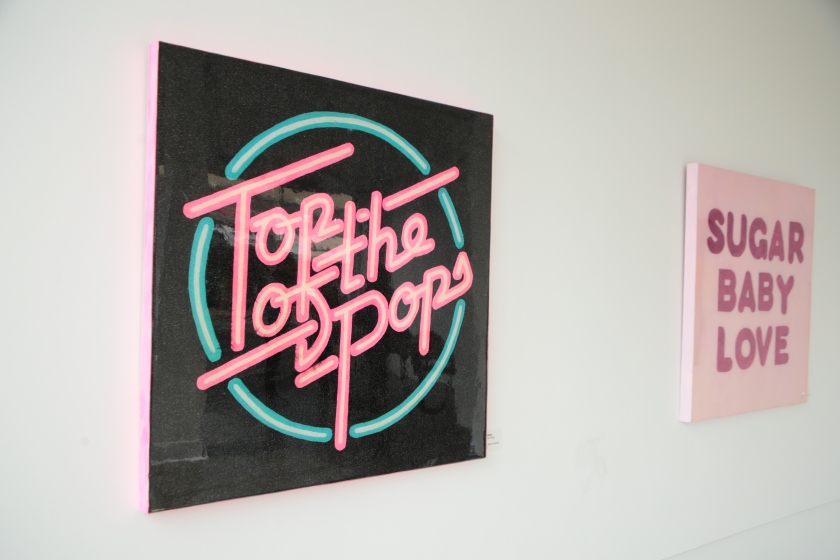 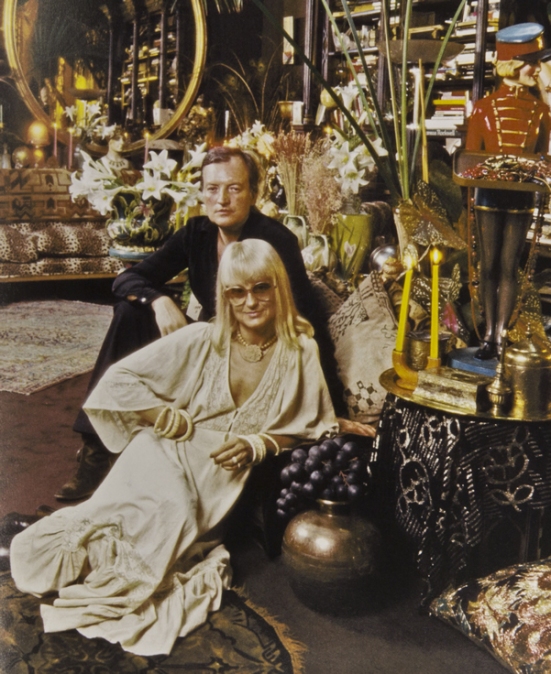 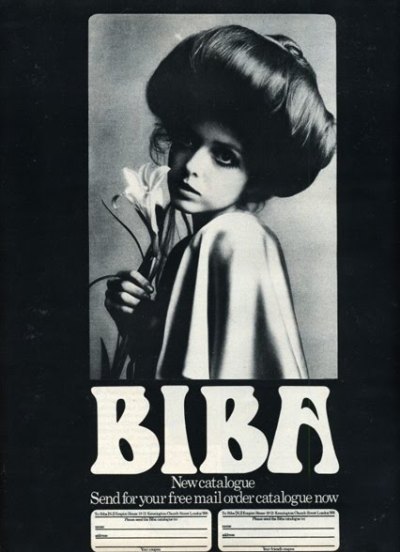 “I used to buy 45’s of my favorite music and music became my life, my religion. I was in love with mini skirts and go go boots and it was all so wonderful! I can remember seeing Carnaby street for the first time and going to Biba Boutique. The art decor was inspiring! “ 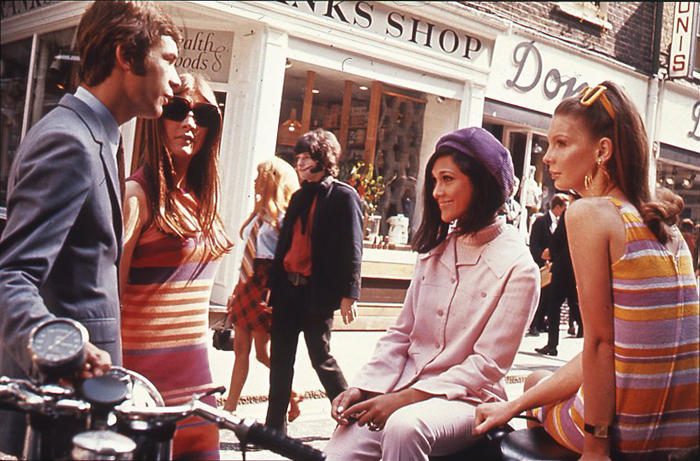 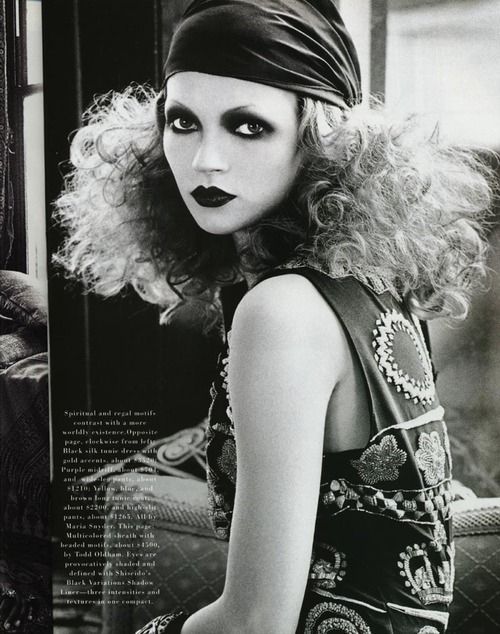 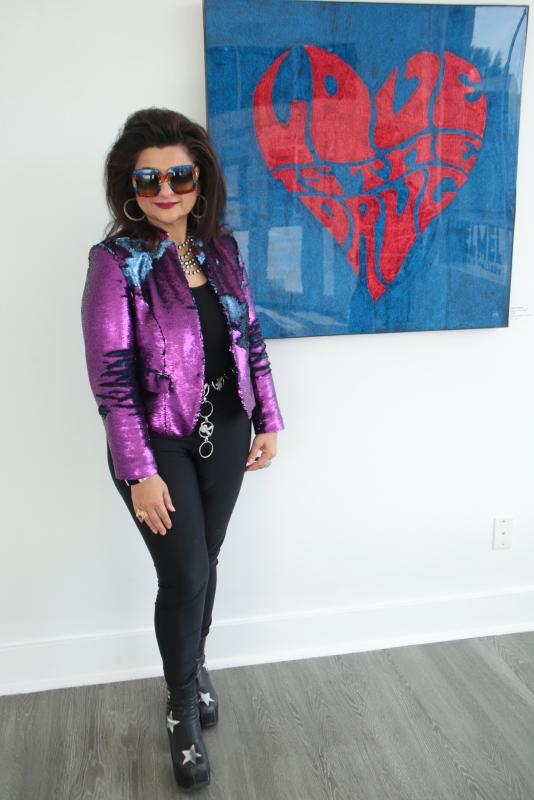 Little did Tamie know that later in life these influential moments would help her to design and create a new renovation of  the iconic Art Deco building in the city of Santa Monica, Hotel Shangri-La. 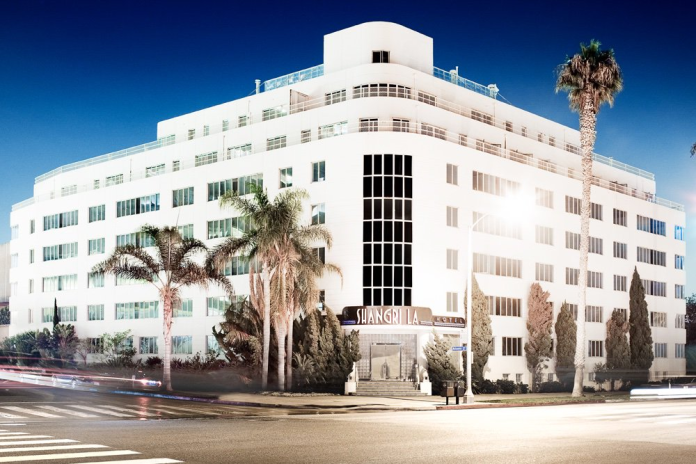 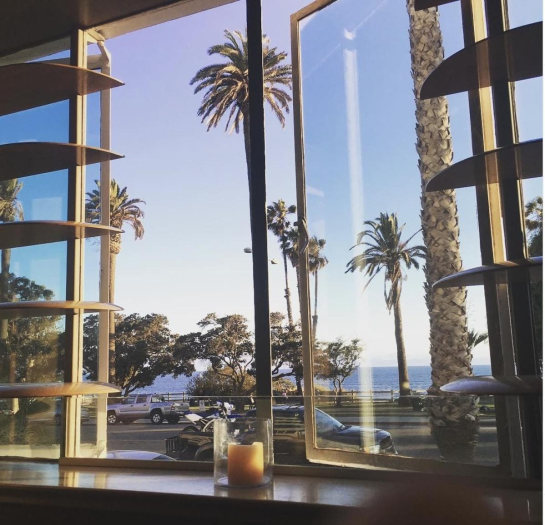 Tamie is not only an artist but also a mother, hotelier, entrepreneur and a very successful business woman. Tamie has many great accomplishments and says…“The secret to being a successful career woman and family person is to realize that you can have it all but just not all at the same time. Life is in stages and to be successful you have to honor and enjoy each of the different stages of your life and career.” 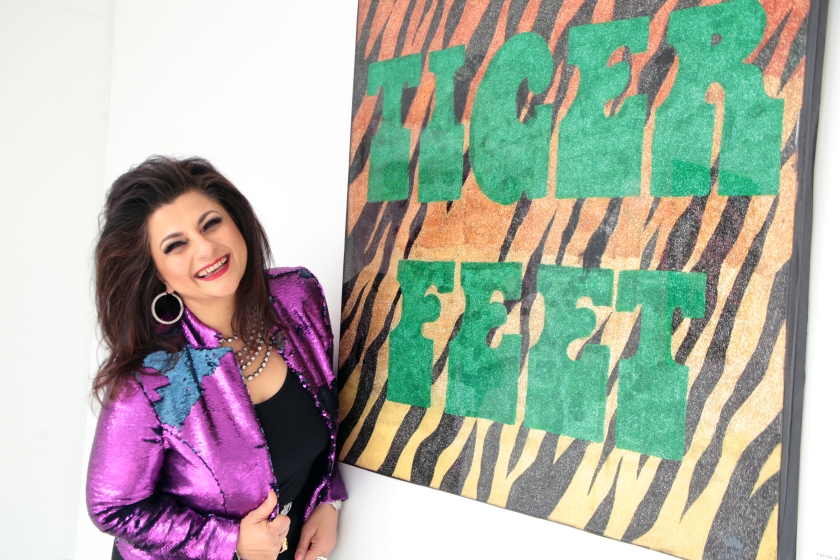 Tamie says her artwork celebrates a homage to times that were simpler and held an innocence. Tamie brings high energy and a positive outlook on life with her creative artwork. There was once an empty space in the art world just waiting for the arrival of a mood changer and Tamie Adaya has arrived with GLAM!

In a world that is base driven

I call my art 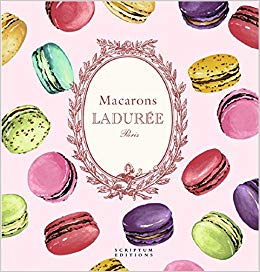 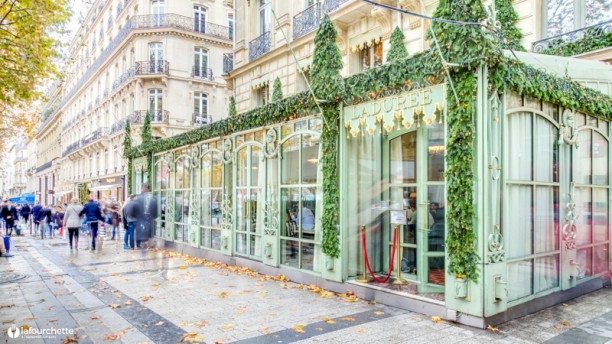 Tamie Adaya’s Glam paintings are an exuberant efflorescence of kinetic Pop appropriation and a boldly graphic evocation of the transgressive sonic spirit of early 1970s glam rock. Her use of iconic song titles and rock logos in boldly graphic designs of period typography, vivid pigments and kinetic textures represent a visual synthesis of Tamie’s backgrounds in art, interior design, fashion and the rock music scenes of Los Angeles and London.

The Glam paintings may be most closely descended from the multiple word paintings by Los Angeles Pop artist Ed Ruscha that appeared almost simultaneously with glam.

Like Ruscha, Tamie’s decontexualized appropriations of language open up what are familiar, aphoristic song titles or lyrics with a multiplicity of potential, ironic meanings. A painting like “Angel Face,” with its confectionary magenta-icing typography against a cosmic, glitter-black background of twinkling stars playfully imbues its candy valentine surfaces with incongruent and more metaphysical possibilities.