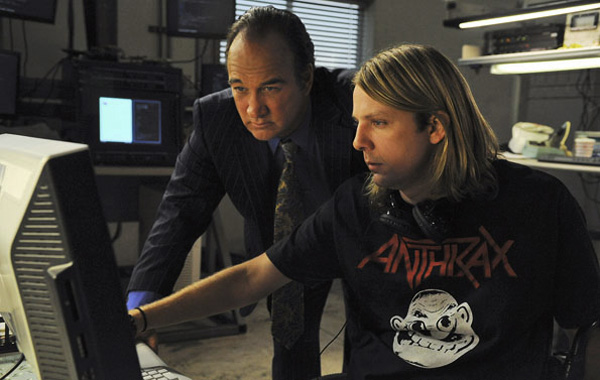 A Successful Actor who shares his story of;

His Journey of Life changes and challenges

It seemed as though Tobias almost new somehow within himself as a child that he needed to be brave. As children we are more connected to our lives spiritual feelings than many are as adults. 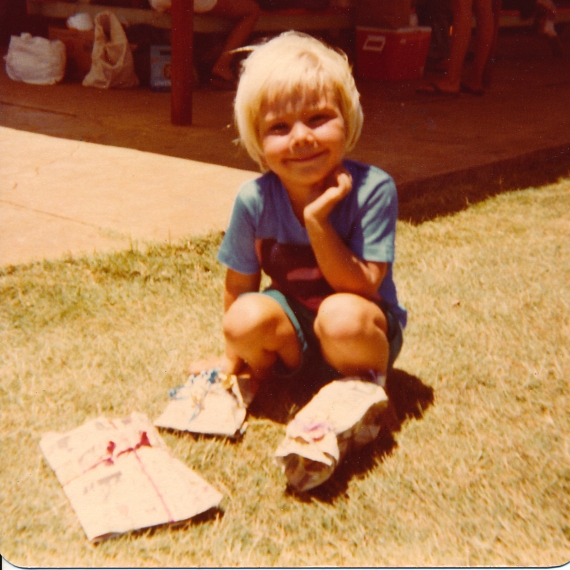 Toby as a child

Tobias’ birth parents were “free spirited artistic people” Tobias says. He was born in 1975 and surrounded by music and alternative culture. His father worked on a barge and so a young boy was raised on a barge ship and experienced new adventure. 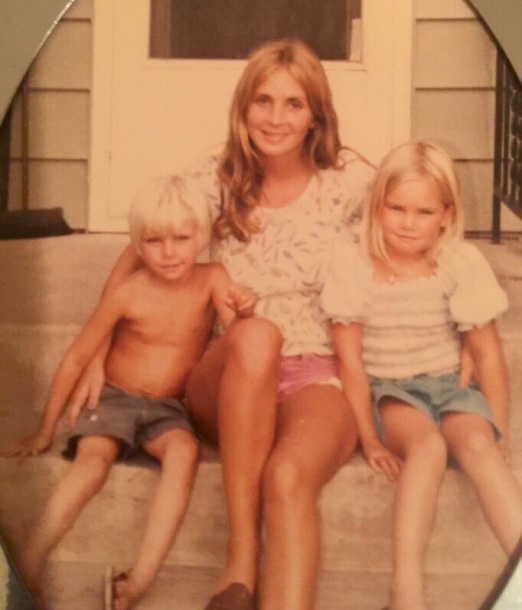 Toby and older sister Lani with their birth mother Marla

Eventually, they would have free passage to Hawaii where they would live for a while. At the age of 6 his father would “split” in Tobias’ words. His mother would raise both he and his older sister alone. Tobias speaks highly of his mother and as an adult understands how she did her best to figure it out.

At around 8 years of age they moved back to Minnesota and redesigned their lives. While living in Hawaii, Tobias was very precocious and fearless, always climbing and jumping. As a child he was very involved in gymnastics, a perfect fit. He loved music because he had grown up in his first years in a world filled with music, but Tobias said “The music left when my dad left” and so gymnastics it was.

Another big life change hits Tobias a year after moving to Minnesota. His mother was in a bad relationship and this eventually took her life when her partner shot her. Tobias was near when it happened and this was pure devastation. Imagine a young child dealing with such shock. Now parentless with grandparents too old to take care of he and his sister, where would they go? 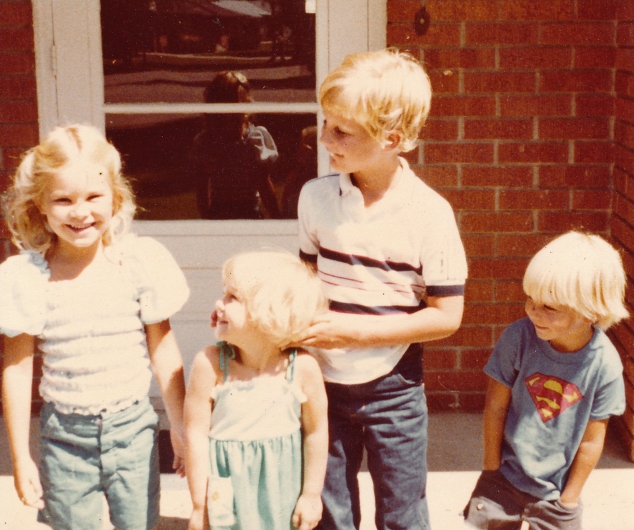 Toby with brother Derek and sisters Lani and Nikki as kids

Tobias and his sister were adopted by his Aunt and Uncle who had children close to their age. “A Family was formed” Tobias says as they became their mother, father and siblings. “It is about love, not blood” he says. He felt very fortunate because he had structure in his life now, something he had never known before. 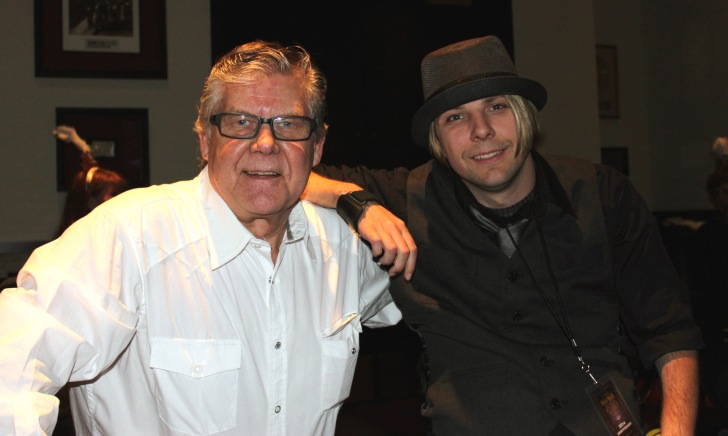 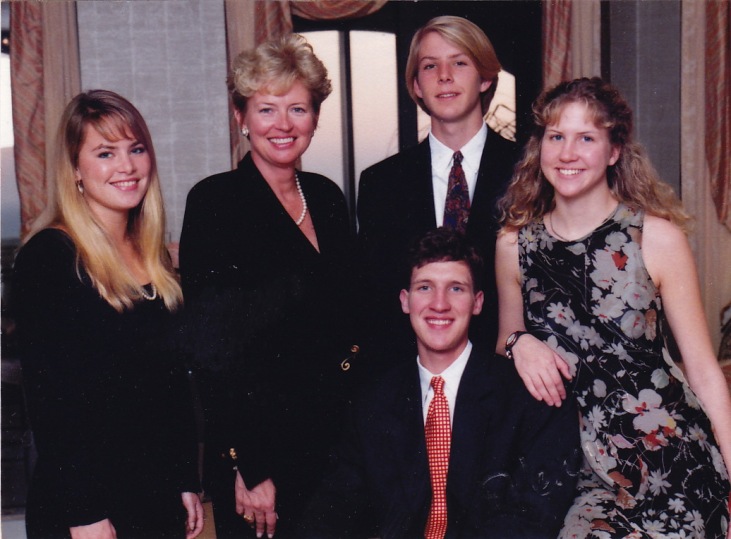 He would get back into gymnastics and doing very well. There came a time when Tobias fell and did not realize that he was walking around with a spinal cord injury which he would continue to do for years.

When the summers came he would spend them with his other Aunt. “This Aunt helped to raise me and this created a strong family bond and that is cool!” says Tobias. 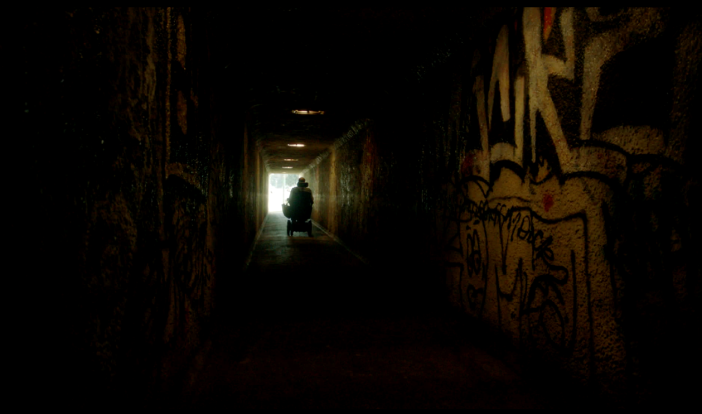 Wheelchair silhouette while driving through a mysterious tunnel in “Wisdom of The Crowd”.

At the age of 15 Tobias said his parents politely asked if he would like to go to Valley Forge Military Academy. He did well here and was promoted to First lieutenant executive officer. 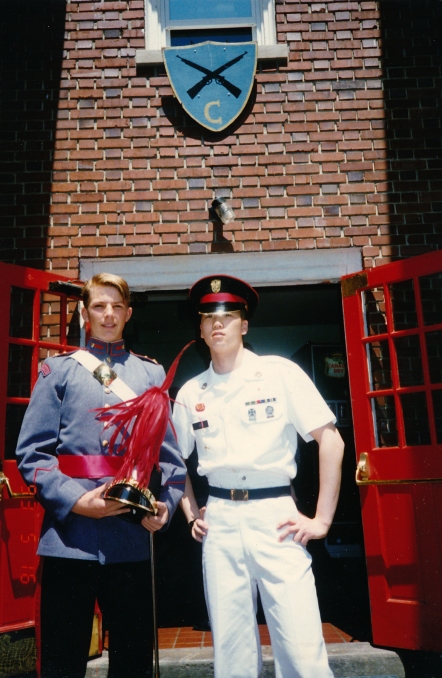 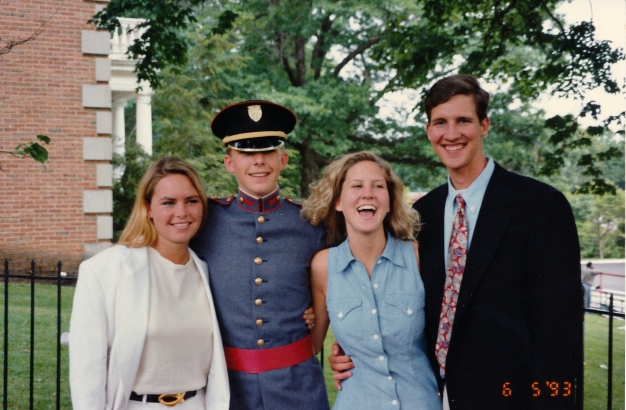 Toby with brother and sisters at VFMA

“We use to have Parade practice and to get out of it I knew that choir was happening at the same time and so music came back into my life.” “My first performance if you can believe it was singing a German Opera at Carnegie Hall”. “I graduated military school and chose a school that I could have a lot to do outdoors. I loved skiing so I chose Northern Arizona University. I studied psychology and that was a no and then Art and computer graphics , and so then came jewelry making.” 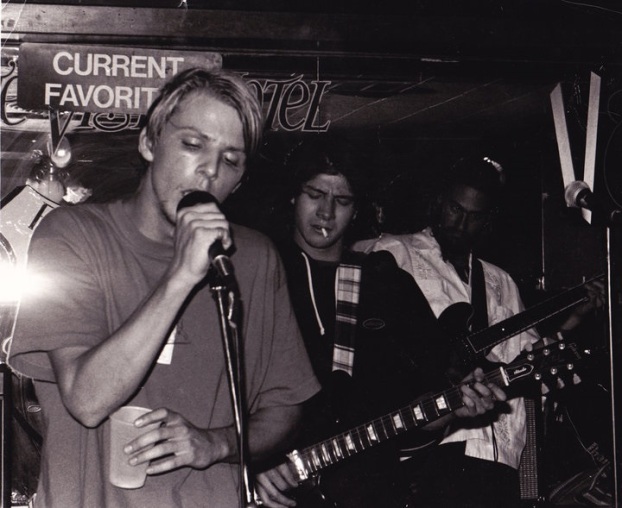 “I began singing in bands and guitar playing. My Uncle gave me my moms drums from India and I began hand drumming. It was a good feeling being in front of people expressing myself.” 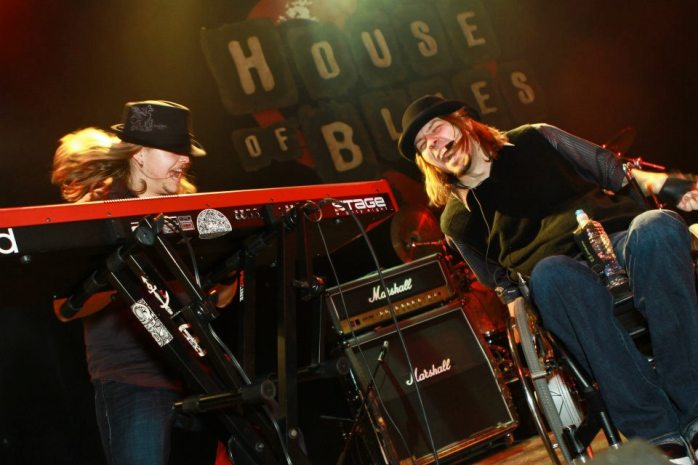 Singing on the main stage with “Cityzen at The House  of Blues  Hollywood a few years ago.

“My Mom bought a place in Aspen and so I would plan to go there to do jewelry design and music. I decided to go to the Grand Canyon one last time with some friends before leaving for Aspen just two weeks away.” 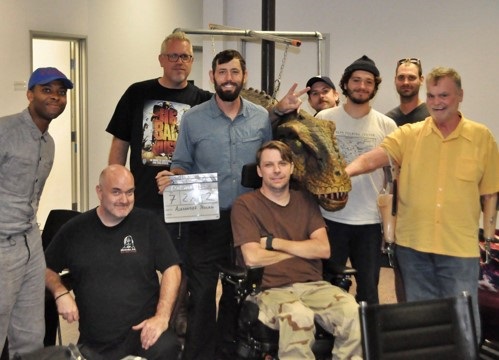 The Daruma Trailer’s primary cast and crew including John, Toby and Alex.

“I was fearless, whatever was dangerous I went for it! We decided we were going to dive off a waterfall, a place where many had dove before. We had a waterproof camera and the idea was to get a picture of the dive. So I had to be the first one to go and I decided to go big and do a swan dive.” What we did not know is that El Nino had changed the water level and it was not as deep as it usually is. 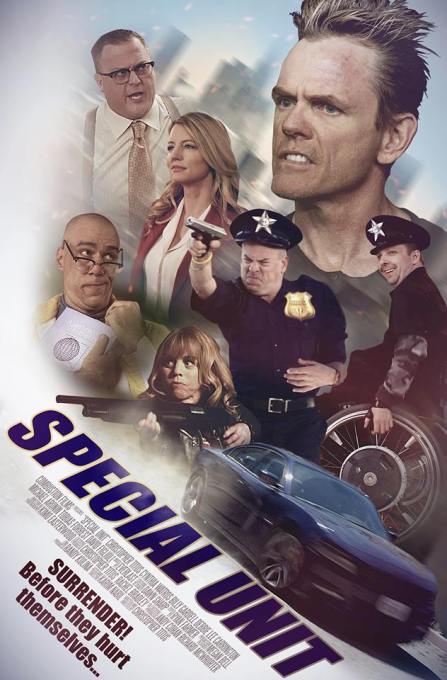 Now things will change, like no other change before. Tobias would experience again something unimaginable. ” I hit the water and then the bottom and a shock of electricity went through my body and my whole body just shut off. I had shattered my fifth vertebrae. I knew what had happened. I had grown up watching spinal cord injuries because of my fathers company he owned which helped develop the instrumentation for spinal cord injuries.  I could not move and I could not breathe and I thought I am going to die. I knew I could hold my breath for a long time because I was on the swim team and had learned how. I said my prayers to God and thanked him for all the good things in my life and all the love that I had received here, for the human bonds that were created. I did die. I was under water for over 5 minutes.” 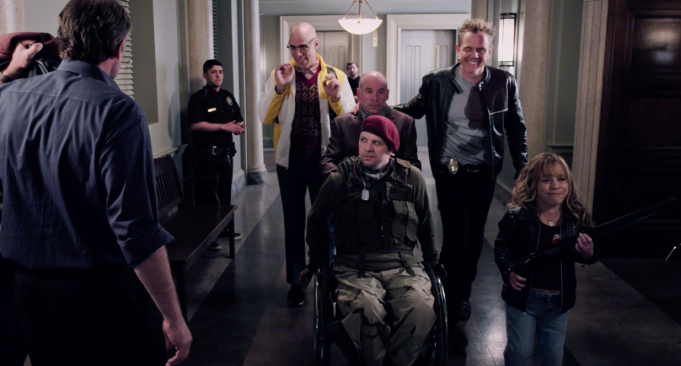 “At this time no one had seen me come up and my friends were trying to get down to me. People were gathering around. My friend dove in after me when he did not see me come back up and also hurt himself but was ok. I floated up and I’m not quite sure who actually pulled me out. A doctor happened to be there on vacation and began resuscitating me, he reset my neck allowing my airway to be ready for CPR. When the helicopter came my body gave up. I spent 2 months in ICU”. 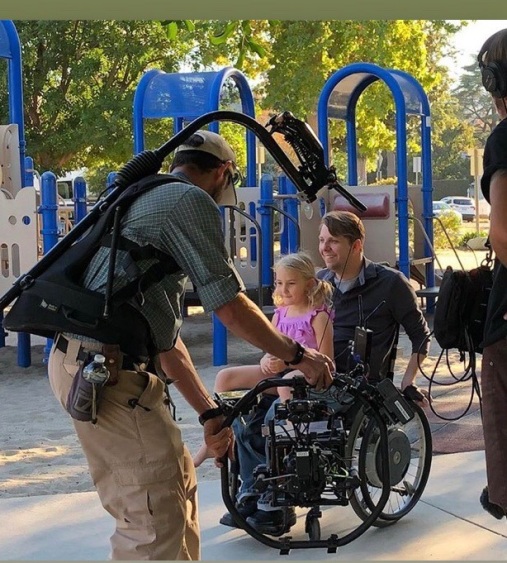 Filming behind the scenes on the Daruma trailer with director Alexander Yellen behind the camera.

Now we move forward through therapy, physical therapy and an understanding that Tobias must learn to deal with life itself in a whole new way, as a C5 quadriplegic. “For months there was no art and no music”, Tobias says and he needed to be creative. He started painting and writing poetry. 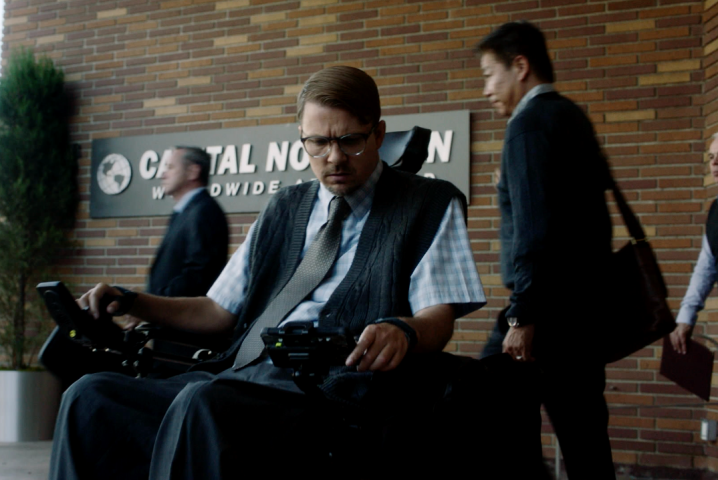 Helping  to solve the crime in a screenshot from the television show “Wisdom of The Crowd”.

This amazing human being only had thoughts of “How do I help people” said Tobias. “I need to do more than this!”. So Tobias went back to school ironically to get his Master’s in psychology. 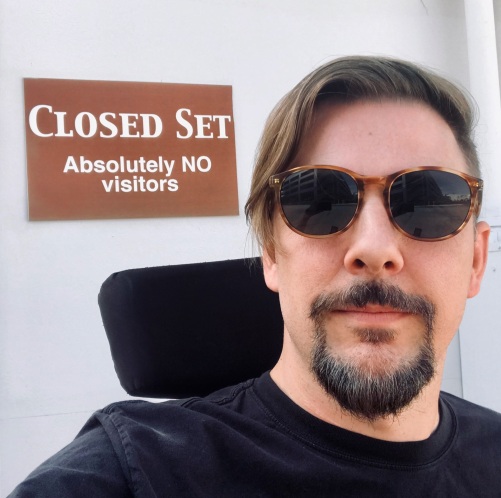 Outside of Stages for “How To Get Away With Murder”.at Sunset Gower Studios.

I had an assignment where I was to portray a man with alzheimer’s  and I did well and was asked by my acting mentor why are you not an actor? I wanted to take improve classes and the only thing is that it was a flight of stairs up that I could not do. “I was amazed that a group of people would eventually carry me up those stairs so that I could participate.” Going in disguise and trying to stay undercover with Michael Aronin in “Special Unit”.

“My dad now developing robotic technology at USC and UCLA, so I decided to move back to California. I had the acting bug and there was an acting competition for people with disability and it was The Christopher Reeves Scholorship worth 5,000.00. And so it all began.” 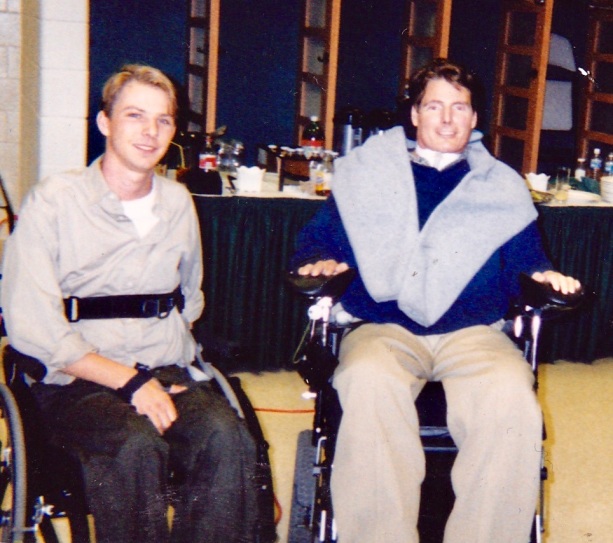 “I had different jobs and stayed in acting classes. Things began to move in the right direction with auditions and booking jobs. I am creating and writing my own projects and look forward to my future. Each year it gets bigger and better. It is a delicate balance pursuing acting with a disability. I am doing what I love.” 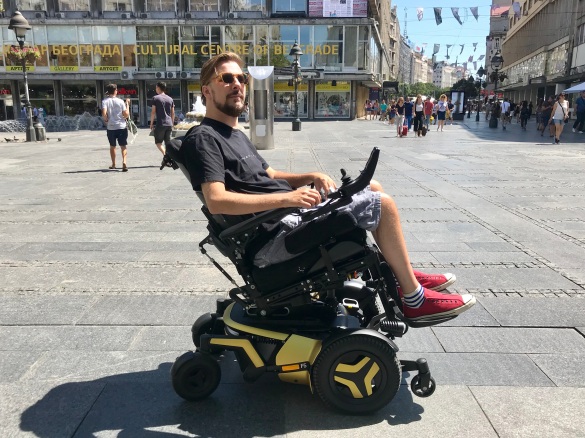 Exploring Belgrade Center in a Permobil F5 while filming a movie in Serbia.

He is brave and bold and is still fearless in the pursuit of his dreams. I am glad to know you Tobias and you are an inspiration to those both with disability and without. 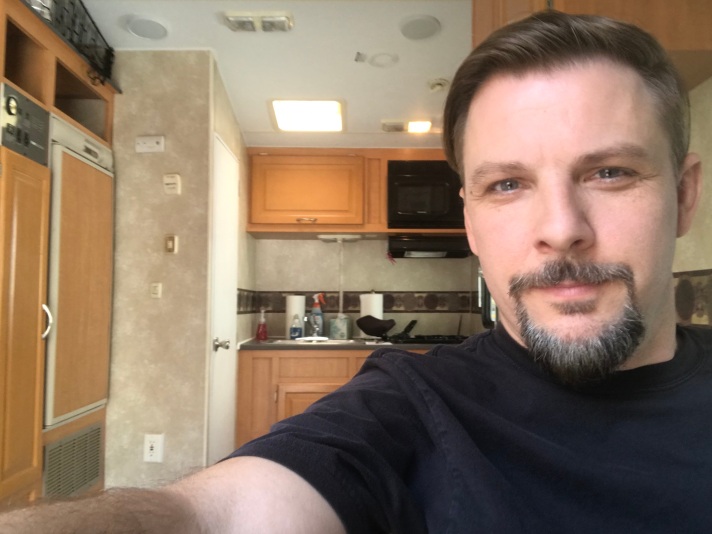 Tobias has been involved with and supports Artists for Trauma

ArtQuench is proud to support 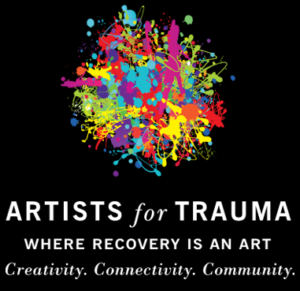 Trauma claims many victims and takes many forms. A car crash, burning inferno, plane crash, accident on the job, gun shot, explosion, a catastrophic fall, an incident of war. Sometimes survivors don’t even remember the moment of impact and sometimes all they can remember is waking up in the hospital with their lives irrevocably changed. Disfigurement, disability and a long and difficult process of recovery are often results of trauma.

What is the challenge of surviving this level of trauma?

Re-creating a new version of one’s life… physically, mentally and emotionally. Artists for Trauma provides the platform for the trauma survivor to participate in “creative engagement”, a proven pathway to positively re-connect with themselves and their community.

Awareness gives one the sensitivity to see possibilities and potential both within themself and in the world, while creativity gives one the ability to engage with the transformation of everything that awareness comes into contact with.AFT provides trauma survivors a means to heighten their awareness, creativity and engagement by pairing them with an artist from an art discipline that speaks to their heart.