November 4, 2019 ArtQuench ArtQuench TV, Featured Artists, News, Out and About Leave a comment

The ReelAbilities Film Festival was in Los Angeles 10/25 through 10/27 and it was such an honor to be in attendance and to be at a film festival that not only brings talent together, but a festival that truly celebrates and recognizes people living and thriving with disabilities of all types.

Michael Dougherty CO Director of the film festival with his family.

It seems like there are so many film festivals now in Los Angeles, but this one here is truly special because they dedicate themselves on educating people about the lives and the artistic expressions of those living with disabilities. 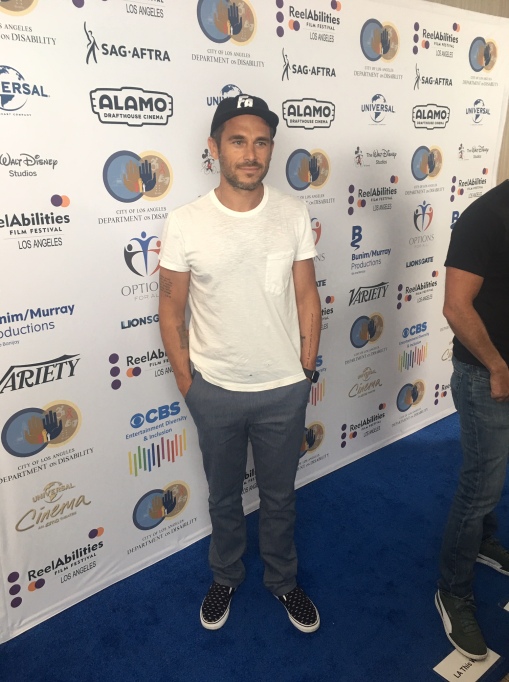 “Disability is Diversity” is the tagline for the festival and it rings so true, especially after speaking to some of the guests that were in attendance for the opening night feature film “The Peanut Butter Falcon” starring Shia Leboeuf, Dakota Johnson and Danny Woodburn.

The Co-director of the film festival Michael Dougherty, who lives with Spina Bifida expresses to me that “movies saved my life”. He feels that cinema and losing himself in the movies gave him hope as he grew up and overcoming being bullied, which leads back to this festival showcasing a safe space and showing that there is room for all people, especially those with disabilities to work in the entertainment industry. All people should be included and have the right to be there.

Actor and a personal friend,  RJ Mitte from AMC’s hugely successful “Breaking Bad” was also in attendance and he explained to me the importance of the festival and how inspired he feels being in the category with so many other talented individuals. He says that his role on “Breaking Bad” was so perfect for him and such a challenge at the same time, but also how the show changed his life and gave him the platform to showcase his talent and show the world that anything is possible!  RJ was at the festival to raise awareness and celebrate all of those living with disabilities and being working Actors in the business.

The festival was a huge success and there were over 20 feature films, short films and documentaries dealing with diverse global issues such as suicide, bullying, deafness and disabilities in the form of not only physical, but also intellectual.

For more information on the festival please visit www.reelabilities.org/losangeles and support these artists and their work. I was very inspired and honored to be there and to celebrate all of these incredible human beings!