October 11, 2017 ArtQuench Featured Artists, News, Out and About Leave a comment

Encouraged by his artistic mother John learns at an early age the techniques of drawing. His travels to different environments affect his work and allow him to grow in new ways.  John’s exceptional work shows his range of talent and inspires us to continue to grow in our craft.

Why do I create the images I do? How did it all begin? Where does my inspiration come from?

I was raised in Escondido, California, in the north county of San Diego. My childhood was fairly average; public school, three older sisters, my mother was a nurse and my father a school teacher. We didn’t grow up rich or poor, somewhere in the middle. I had an aptitude for drawing from an early age, encouraged by my mother who had dabbled in painting and drawing before I was born. I remember seeing her sketch a cabin in the woods on a camping trip – watching her create the image of the cabin on a sketchbook page was magical. My young mind was fascinated by the ability to translate something from the “real” world into a drawing on a two-dimensional surface. She bought me books on how to draw, pen and ink techniques, pens, pencils and art supplies while growing up. Early on I was fascinated by line work, cross hatching, stippling, old black and white comics and pen and ink in general. I consumed images voraciously, looking into the technical elements of how people created such detailed and absorbing images. I admired the work of Gustave Doré, Pushead, M.C. Escher, Bernie Wrightson, and a variety of other illustrators and printmakers.

After high school, I began experimenting with Xerox copies and collages, cut and paste, “xerography” this is before I knew of Wallace Berman who remains one of my favorite artists. I would take an image and Xerox it at a slightly larger or smaller percent size of the original and paste that down to be Xeroxed again, creating repeating, expanding, contracting and concentric patterns, mostly starting with images of faces and/or partial faces (ears, eyes, etc.), also incorporating things that fascinated me like barcodes, circuitry, astronomy, technical drawings and mystical symbols.

I spent a few years after high school working at a coffee house owned by a Swiss sculptor who critiqued my work and encouraged me to attend college. I began to take classes part time at a community college, mostly art and art history. Perhaps not surprisingly, once introduced, I fell in love with printmaking and spent years studying the various techniques.

“Untitled” circa 1998 acrylic and marble dust on canvas

After years at different community colleges I transferred to art school in Chicago, where I began painting in earnest. I was fascinated by the architecture, skyscrapers, bridges and city infrastructure. Slowly the cityscapes became abstracted to the point of near hard-edge abstract painting, while retaining little organic elements, usually in the form of clouds, sunsets and atmosphere hiding behind the geometry. Chicago was cold and I painted in more subdued and deeper tones, more blues, greys and purples. I had entered Chicago with an emphasis in printmaking but by the time I left I was more focused on painting and drawing.

“Untitled” circa 2000 acrylic on canvas

During my time in Chicago I was accepted to a New York studio residency program and so spent half a year painting in New York. It was an amazing time filled with art openings, museum visits, and marathon paint sessions. I couldn’t afford rent in New York during my residency so I slept in the studio, since it was an industrial space the heat would be turned off during the weekends. I slept under a piece of canvas with my jacket as a pillow. Luckily New York wasn’t as cold as Chicago (at least the time I was there), it was brighter and more vibrant. I began using brighter colors, more hot pink, bright orange and light blue. I experimented more with biomorphic forms against hard-edged geometry and incorporated more details of the “real world” but abstracted.

After the residency program was done I had learned a lot about how the environment affected not only my color palette but subject matter as well. Back in California the colors became brighter again, the shapes and compositions more whimsical while retaining a structural, geometric aspect.

Over the past decade or so I’ve been working primarily on paper and occasionally wood panel. The recent drawings are mostly colored pencil and ink, although I’m fond of using watercolor, gouache, charcoal, pastel and a variety of other media. I tend to create the general composition, fill it in with color and then add layers of ink details in concentric patterns, which can be quite time consuming. 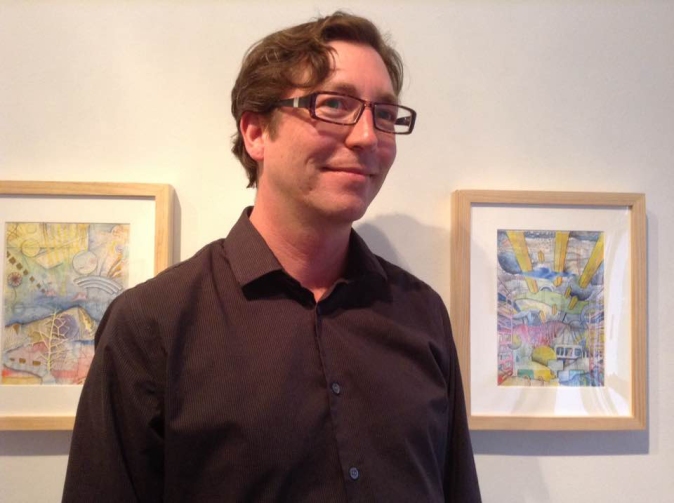 Today my drawings and paintings are a mix of everything I’ve learned, both technical and emotional. I’m still fascinated by creating reality on two-dimensions, line work and details.

Submissions are Open to be included in the next issue of