February 23, 2016 ArtQuench News, Out and About Leave a comment 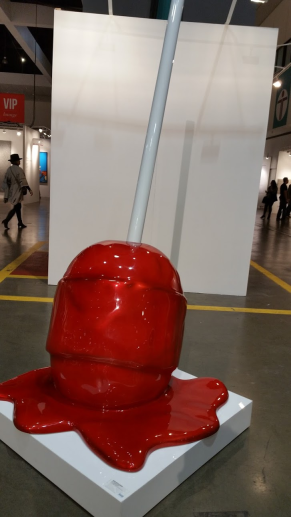 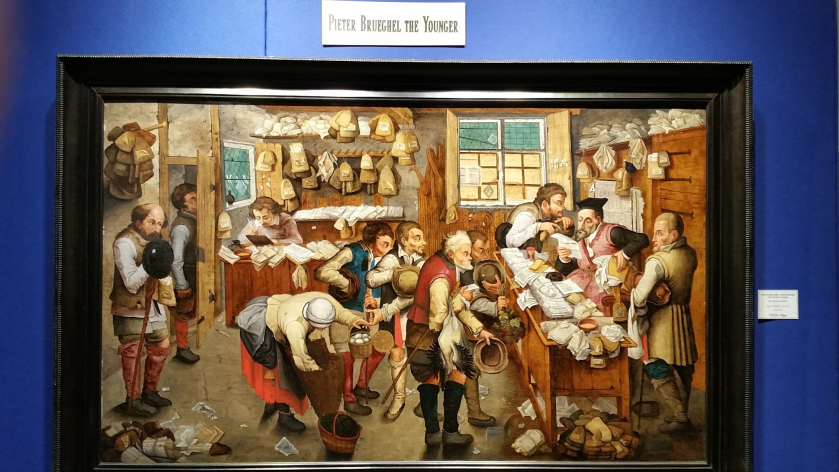 Ever wanted to walk through cake?  Ever wanted to sit with Gertrude Stein in the “Salon  de Feurus”?  Ever imagined a giant lollipop?  Well stretch the longitudes of your imagination with the art of the LA Art Show.  This year the LA Art Show, benefiting St. Jude Children’s Research Hospital, took place on January 27 through 31st, 2016.  The LA Convention Hall which should really be renamed the Gigantic Hall Too Big To Cover in One Visit, was consumed with local and international artists.  There were paintings from Peter Brueghel the Younger to Anthony Vargas, painting portraits of people posing for him at the exhibit.  From timeless to timely, each space was an adventure into the creative spirit.  All together the artists created a phenomenal presence for the audience walking through.  And if that was not enough, there was wonderful food and drinks to enjoy.

As you entered the LA Art Show, there was a fascinating and curious salon set up.  Stepping into the “Salon de Fleurus” sponsored by the Independent Curators International (ICI), http://curatorsintl.org, and Fine Arts Dealers Association, http://www.fada.org, you were removed from the Los Angeles Art Scene and were transported to an earlier time in Paris, France.  On the walls were painted copies of the collection of Gertrude Stein, probably one of the most famous icons of modern art collectors.  The scent of artists such as Picasso, Man Ray, and Matisse can be imagined on the Victorian couches and chairs.  Gertrude Stein herself can be imagined holding court in this salon.  “Salon de Fleurus” is a traveling exhibit.  The next stop will be in March, 2016, in Poland.  The newspaper publication that is created for each exhibition will be published in the local language and available to the attendees.  From Poland the exhibition will go to Kosoval and then Ohio.  The LA Art Show had a preview version of the “Salon de Fleurus”; the actual exhibition is about 800 square feet.

Here is Gertrude Stein’s salon; she was an expatriate in Paris, France.  Her vision of art was from the outside yet she understood the misunderstood artists of her day.  She nurtured some through purchasing their paintings.  She also provided opportunities for cross pollination of the artists through her salon.  The subject of conversation about art and painting hangs in the air of this salon.  I wanted to sit down and ask the question where does that conversation happen today?  Is it on Facebook?  What has happened to the Salons, Galleries, and Art Shows of today? What is the role of a collector?  Are they the voice that determines artistic importance? The exhibit is about looking at art history as a story, and how we can understand, make sense and understand today’s canon through exhibitions and collecting.  What a poignant art statement for the LA Art Show’s key exhibit at the front door. 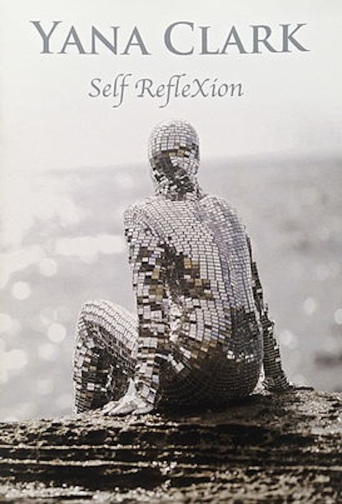 I attended the Opening Party.  There I met a woman dressed in mirrors passing out cryptic sayings on pieces of paper.  My piece of paper was a quote from Eckhart Tolle, “When you don’t cover up the world with words and labels, a sense of the miraculous returns to your life that was lost a long time ago when humanity, instead of using thought, became possessed by thought”.  The title of her performance was Self Reflexion and her name is Yana Clark, www.yanaclark.com and she is from Brazil.  She has published a book of her images, Self Reflexion. Yana certainly kicked off this year’s LA Art Show Party! 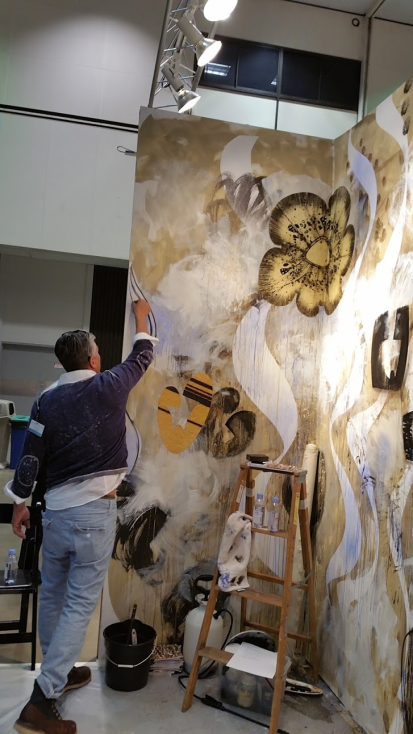 Also at the opening party was Tony Abeyta www.tonyabeyta.com, who was painting a large painting that spanned over 10’ long at the art show.  The painting is indicative of his Contemporary Style.  Tony was hard at work although many of those around him were drinking wine and eating luscious food.  From Tony’ Abeyla’s website; “There exists a rhythm in the land where I was born. I spend a lot of time deciphering the light, the cascades of mesas into canyons, the marriage between earth and sky and the light as it constantly changes at whim, the intensity of rock formations, and the sage and chamisa that accent this poetic experience, unlike anywhere else I have seen. I am beckoned to remember it and then to paint it.” Tony mentioned to me that he had work exhibited in the Smithsonian.  He a Navajo and his work is featured in Santa Fe, New Mexico and Berkeley, CA.

The Downtown Los Angeles Art Walk, www.downtownartwalk.org, featured Catherine Coan, Assemblage Artist.  I loved how the theme of Catherine Coan’s room of animals decimating the antiques of our mother’s era was constructed.   The taxidermy bushpig on the tabletop was rich with symbolism and pure animal energy.  The pig who was intended to be dinner still had the apple in his mouth.   While I visited the exhibit, people were sitting at the dining room table being photographed with the life-sized wild bushpig smashing the china and crystal.  Other parts of the exhibit featured taxidermy animals in the parlor, such as the carnivore elk, caged canary who committed suicide, and the strange furry animal with bird like feet and a pet dead canary on a wire.  Catherine Coan studied taxidermy and incorporates this into her art.  The installation asks us to examine her images in life-size and feel the cognitive dissonance within and without.

Littletopia, was an aisle at the art show.  Everywhere you turned was an exciting and creative avenue of artists and projects.  There was more than one could digest in a day.  I met with Jenna Bao, www.jennabao.com, painter and Lolita.  What attracted my eye to her artwork was Jenna herself.  She was dressed up as a Lolita.  So I asked what is a “Lolita”?  A Lolita is a fashion subculture, originated in Japan and is clothing in the style of Victorian and Edwardian periods.  The Lolita movement in Los Angeles is spearheaded by Jenna Bao.  The Lolitas hold teas and wear their intricate outfits.  Besides the Lolita connection Jenna Bao is a graduate of Art Center and a painter of lovely flowers.  Her work is slated to be exhibited in Paris, Seoul, Tokyo and Osaka.   She is a young artist on my watch list. 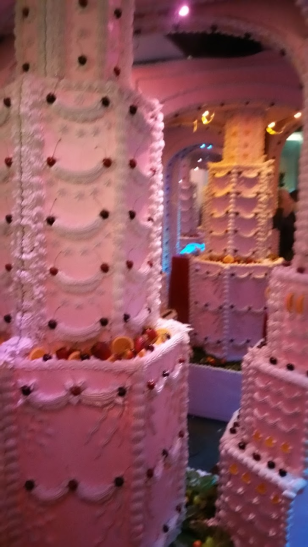 Also along Littletopia was the Think Tank Gallery.  I had heard about this installation while standing in the line to get a glass of wine.  Think Tank Gallery, www.thinktankgallery.org is a large gallery in downtown Los Angeles.  It boasts 6,500 square feet of gallery space fit for art exhibits, events, and film/photo productions. The month of February 13 to March 13, 2016, hosts the “Break Bread Exhibit”.  The LA Art Show featured a sample of this exhibit of pale pink cake complete with sugary frosting reminiscent of a wedding or a diabetic’s dream.  The artist, Scott Hove and Baker’s Son, filled their space with cake and a disco lamp creating a surreal fantasy of cake and mirrors.  This was a portent of the installation of cake, which will encompass the whole Think Tank Galley in Downtown Los Angeles.  Standing in the cake room, I felt like that ballerina in your jewelry box twisting around in a heaven of pink and blue fantasy.  Your senses were completely surrounded with this incredible cake and frosting with fake flowers flowing freely.

Also represented were several artists from China through the Bureau of External Cultural Relations and the Ministry of Culture, People’s Republic of China.   Artists using the Chinese Brush Painting technique in new impressionistic and abstract styles were featured.  Alongside these artists were Chinese Artists who were more “Western” and used oil paints for their Chinese subjects.  Chen Chunxia and Tony Song are two such artists with captivating oil canvases.

What would the Art of Los Angeles be without muralists?  The forefront of the wave of these artists who span decades of paintings in Los Angeles is the Mural Conservancy of Los Angeles (MCLA) www.muralconservancy.org.  The murals we see along the freeways, sprawled across tall buildings and in back alleys is difficult to create as murals are illegal in parts of Los Angeles.  The dialog about what is tagging (gang markings) and what is art is an ongoing dilemma.  Active muralists created a mural at the show in real-time with brushes and spray paint.

You can almost say that the show is actually a piece of art as it gathers the best of best in Los Angeles.  Artists can walk through the LA Art Show and have a creative experience.  Who knows what jars the imagination, how it is nurtured, and what will inspire the audience.  That’s the great thing about art, it stretches your imagination and knows no boundaries.

ArtQuench Is Now Accepting Submissions For 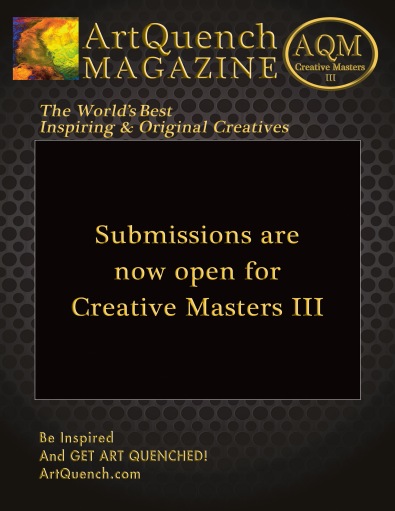