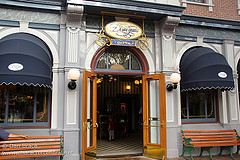 Dave Avanzino is a fine artist, scenic designer and production designer living in the Southern California area. A native Californian, Dave grew up in the beautiful Napa Valley where his family has lived since the 1940′s.

After pursuing a vocal performance degree for 2 years of college, he changed his major to art, a childhood passion, and graduated with a degree in art from California State University Long Beach. He worked in the graphic design field for several years and also created a wide variety of murals and artwork for clients in Southern California and across the country. Dave also works as a Scenic Designer for the theater and has created original set designs for the musicals “Four Tickets to Christmas” (Lillenas Drama) and “Christmas Post” (Word Music) which were marketed with the productions. Dave is the creator and one of the authors of “Uncle Phil’s Diner,” an interactive dinner theater piece for outreach which is published by Lillenas Drama.

He has also worked as a Production Designer for television, film and video projects. His work has been seen in the movies for television “A Vow to Cherish” and “Road to Redemption” (Worldwide Pictures), and the video series “Present Time” (Zondervan) and “Newtons’ Workshop” (Moody). He also was the set and production designer for “The Jesus Film for Children.” Dave is also a Disney® artist and has created a variety of limited edition multimedia pieces for collector events.

Add to Your Calendar

This program which officially launched at the D23 Expo in August 2011 allows you to select some of your favorite Disneyland® Resort attractions and icons to spell your name.  Custom Letter Plaque prices vary based on name length, ranging from one to twenty letters.  Matting and framing included.  Custom Letter Plaque orders are limited and will be taken on a first come, first serve basis. No phone orders will be accepted for this program. Custom orders not available for pick up. Applicable tax and shipping fees apply.

Prices are as follows: