Shares Her Latest Series of Work

Ready to Wear? Ready to Live ! 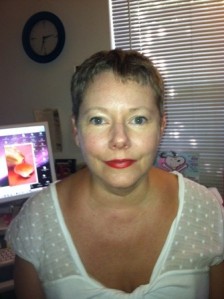 In the chill of November, 2012, leafing through the Spring 2013 Ready-to-Wear couture shows on www.style.com, Amy Jackson became suddenly inspired by both the restraint and the boldness of the various shows. Jackson is hugely inspired by Nature in all of her creative working media, and is somewhat aghast to see the darkness and forbidding, brooding sense of some of the collections. It is as if the women who are to wear the clothes have never and will never see a garden, will never actually see Spring, will only experience a change in temperature.

In some collections, however, there is a primal exuberance, a fiery lust for life and growth that makes sense to Jackson, which she applauds. She can see the women who are to wear the clothes going off to the parks for picnics and excursions, getting outside after being cooped up indoors because of Winter’s chillier temperatures and snow, ice. 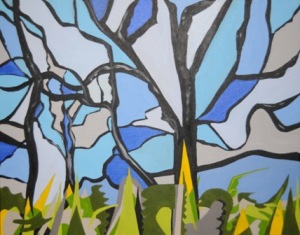 Pulling from the copyrighted collections of Haute Couture, and crediting them for this series of paintings, yet not copying them outright in her work, instead, Jackson is sensing them, inspired by them and being moved by them to choose her color palettes for the series.  Beginning in November, 2012, Jackson is working with colors she has used, for example, in the Kauai, Hawaii paintings for the cliffs and mountains, and in her tropical landscapes, for the symbolized palettes used in the series to represent the previously dormant, but altogether rich Mother Earth, the soil.

To represent the blooms, the flowers, birds, and all of our rich diversity of ideas, inspirations, aspirations, dreams, and newly realized actual breath that comes with Spring – becoming more active again, literally getting warm again, getting outside, exercising, feeling the Sun on our skin, breathing more fully the fresh air, and seeing colors again – Jackson uses the colors inspired by

the palettes used in the selected Spring 2013 Ready-to-Wear pieces. Again, this is not a direct match of color used in the clothing collections, but an inspired color, and inspired shapes. 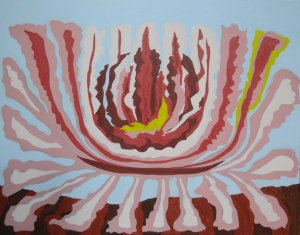 Thirdly, by happenstance, on Jackson’s telephone, a Blackberry, on December 4 at 2:24 pm, she was checking the Internet on Bing, when it showed a graphic, a colorized close-up of the inside of a cathedral. For many decades, Jackson has felt that Nature is her cathedral, and the arches of tall trees in a forest are the vaults of a temple to her.  Quickly sketching the lines and curves of the tiny image from her phone onto a piece of copy paper, she had some of the beginning forms for her Earth and a vaulted sky.

Lastly, as Jackson has worked with the mountain base throughout the pieces, it has become less linear and more rocky. It has come to symbolize her own rocky childhood and bumpy adult past. All forms of growth are seen to develop from this rocky base now in the series, as any type of seed may come from a harsh environment during the ripening season of Spring and Summer, the growing time. Jackson often laughs, that here she is at fourty-eight years old – ready to live! 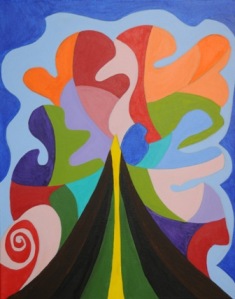 Jackson paints the series with acrylic on canvas, and on occasion augments the texture of the rocky mountain base with gold oil pastel crayon.

For the majority of Jackson’s work, she maintains a smooth canvas, not allowing any of her brushwork to show any texture at all, for the surface to be incredibly clean and polished. When she does allow texture, it is for a reason, such as for the sandy or gravelly surface of the rocky mountain base.

Jackson paints with a bright #8 da Vinci brush for the most part, using larger bright brushes for larger areas such as the sky or broader areas where detail or less control is needed. She uses a #10 bright Princeton brush to edge each of the 1.5 inch borders of the Ready to Live paintings in Mars Black so they are finished. Each of the canvases, except for the 20 x 30 inch pastels which are matted and framed especially for pastel preservation, are 22 x 28 inches in dimension. Currently there are 13 works in the Ready to Live series, 11 acrylic pieces and 2 soft pastel. More to come in 2013-14!

TO VIEW AMY JACKSON’S ArtQuench profile click the link below;