It takes such courage to share a part of your true self with others as J.J. has done.  We believe in doing so it helps one to grow and learn about ones self.

To decipher each puzzle piece with your own analytics and to continue on your journey with a better understanding of who you are,

and hopefully inspiring another in your walk of life.

As you will see in J.J.’s photography, he has used his gift in a most profound way.  We believe in you J.J.! 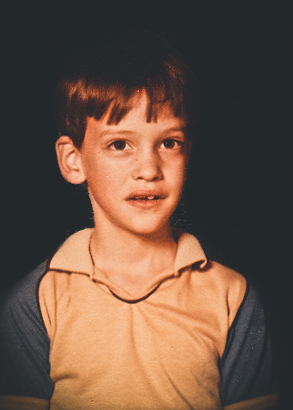 When I was a child, the idea of being an artist or photographer was not something I ever thought about.  I was born in the small town of Chadron, Nebraska and lived there until I was 8 years old.  I have an older sister and a younger brother. At that time, my father who had worked as a college professor had decided to become a preacher.  I can vaguely recall riding in an RV to another town where he was to become ordained by the Assemblies of God church.  My mother, helplessly devoted to my Father because of her own insecurities and childhood issues, supported my father in his new found career as a Minister and School Administrator.  I am not comfortable getting into specifics out of respect to my mother and father who are still alive, but I will say that I grew up feeling detached and unheard.

My father changed jobs about every four years.  I never really understood why, other than the school would close to budgeting reasons, or perhaps there were other reasons not explained to an invisible child. So, every four years I lost the friends I had, which were not many given the fact that I was the principal’s son at the private school I attended.  We moved from Nebraska, to Oklahoma, to California, various places around California, to New Jersey, back to California, and on and on.

Even as a boy, and especially as a young man, I resisted and fought against the kinds of things that organized religion demands of its followers.  It never rang true to me.  It felt oppressive.  It felt manipulative.  And for a child, it also felt incredibly frightening.  I remember one time in Church, people were lining up and walking to the front where a guest preacher, full of “incredible Holy Spirit power”, was placing his hand on their foreheads causing them to faint to the floor, shaking, in a trance.  I thought to myself, “Well I am going to try this.  Because if it’s real, then I want to know.  I need to know if this is real.”  I walked down and got in line.  As the line moved, and I got closer, I was getting nervous.  Excited.  Maybe I was wrong about all of this.  Maybe I could fit in with these people.  I wanted to fit in. Finally, it was my turn.  The preacher put the palm of his hand on my forehead, closed his eyes and said some prayer, then pushed me.  My head moved back from the push, but I just stood there.  I wasn’t trying to resist.  I was willing to feel whatever was suppose to be felt. But I remained standing. He put his palm back on my forehead, this time pushing harder.   Again, my head moved backwards, but I still just stood there.  Then one of the other pastors, who usually was catching the falling believers, took my hand and led me toward the other side of the stage.  I walked back to my seat.  I sat down.  And I felt more alone than ever.

In fact, I felt incredibly alone throughout all of my childhood.  I was an introvert.  I studied my thoughts. I studied those around me.  I observed and analyzed everything.  Being so unsure about my own life, and what was normal, and feeling so lost, I observed human behavior.  I watched how others interacted, moved about, lived their lives.  This fascination was the beginning of the fire that later would be my passion for the candid street portraits I shoot today.

One of the other great pains of my childhood was caused by watching my younger brother slowly display signs of mental illness.  Being so unequipped to deal with it, and having been given no support or help in doing so, I felt an immense amount of anxiety and stress over my brother.  As insecure and helpless as I felt in my own life, I would often feel embarrassed by my brother.  I held onto a large amount of pain, anger and guilt for many years of my life over this.  I wish he had his issues addressed quicker.  I wish he could have been held when he needed it.  Protected.   I would turn to poetry and writing to deal with my feelings.   This helped me get through many awful nights. That, along with therapy, helped me deal with the impact of this kind of life.

I can’t even recall to this day when I first started taking photographs, but I am certain that the moment I really started to use photography as an art form was when my wife bought me a camera as a present.  I mostly took pictures of the places and sights we would see in our travels.  The photos were for myself, for my family.  That was it.

Then Google Plus came into my life.  I know that sounds like a bit of hyperbole, but the social platform changed everything about my work.  For no particular reason, I had not been involved in the other social networks. At least not as an artist or photographer.  But Google Plus interested me for a lot of reasons.   It gave me not only an easyily found audience for my work, but allowed me to learn from others.  My skills increased, my passion increased.   I was particularly moved by the street portraits I saw others posting.  There were two people that inspired me the most, Mike Shaw and Alan Shapiro.  They recognized my work as being good, and told me so.  They encouraged me. 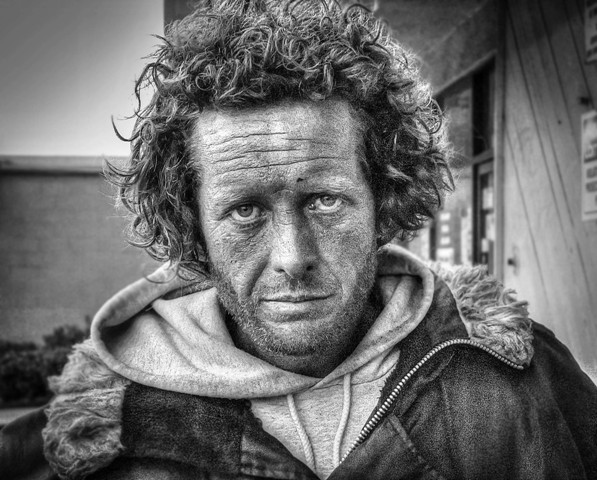 Being the huge introvert that I was, it was very hard for me to approach people to take their picture.  Both Shaw and Shapiro were posting pieces about the kinds of people I also cared about.  Those people that were invisible in life, like I had felt.  The homeless.  The discarded elderly.  The mentally ill.

I was drawn because of my own childhood experiences to do something with my art.  I wanted to be a voice to those who were feeling the way I grew up feeling.  I was not homeless, but I never felt part of a home.  I felt abandoned.   And I felt driven to make society look at these people differently.  I could use my pain that I felt growing up as fuel to overcome the inhibitions I felt in shooting people on the street.  It was a revelation that caused me both further anxiety, of course, but exhilaration and, if it isn’t too grandiose to say, it gave me purpose.

Mike Shaw was particularly helpful in pushing me to not just get the picture, but talk with those I shoot and get their story.  Get their names.  Go back to them.   Befriend them. Although I do post works in a variety of genre I am probably most well known by my followers for my street portraiture work.  I have told the stories of homeless through photography and writing in a way that has seem to struck a chord with those who enjoy my work.  And I am happy about that.  Their feedback, like it is with every artist, is so crucial to the work I do.

If they weren’t listening, and caring, about the people I post, what would the point be?

But they do.  People do.  And maybe, just maybe there is hope in the world for the kind of people I photograph.